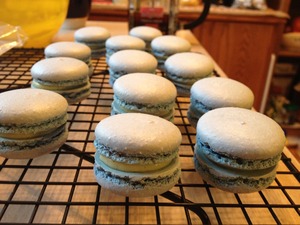 I thought it would be fitting to have my first post be about macarons since they are one of my favourite desserts. While the French have been making macarons for centuries, they have only become popular in Canada in the last few years. I became a little obsessed with them partially because they were one of the few things that I attempted numerous times and still did not get right. So naturally I decided that when I was in Paris this fall, it was a great opportunity to take a macaron course and learn from the experts how to perfect the cookie. The macaron recipe from the course is what I’m going to share.

There are two methods for making macaroons: the Italian and the French method. Both are used extensively by Parisian bakers and result in cookies which taste largely identical, but the Italian method yields more stable cookies. As macarons are very finicky, I opt for the more stable method. Regardless, macarons can be tricky to make and will likely require a few tries to perfect them. To help you succeed, read through the entire recipe and tips below before starting.

For fillings, you can use almost anything. Common fillings include jam, custard and ganache. Keep an eye out for macaron filling ideas as well as what to do with cracked macaron shells in future posts. 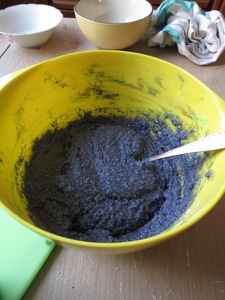 1. Begin by weighing the almond flour and powdered sugar and sifting the two together to incorporate. Add 110 grams of egg whites and the food colouring. Mix together until fully combined. Your mixture should be about twice as dark as your want your cookies to be.

2. Combine the granulated sugar and the water in a saucepan over medium heat and begin cooking the mixture. Use a kitchen thermometer to measure the temperature of the mixture. When it reaches about 112-114°C, begin Step 3.

3. This part is tricky, so be careful to time things right. See Tips below. Begin whisking the other 110 grams of eggs using a standing mixer (i.e. Kitchen Aid) on high and do not stop the mixer. Once the sugar-water mixture reaches 118°C, you will want to carefully add the mixture, pouring it down the sides of the mixing bowl, into the whisked egg whites which should at this point have reached soft peaks. 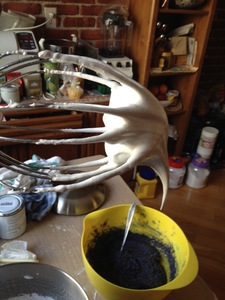 4. Continue beating until the mixture becomes glossy, stiffens and is not hot to touch anymore. Take out the whisk and when the mixture curls down like a bird’s beak, it is ready.

5. Fold the meringue into the coloured mixture in thirds. Ensure the mixture is fully incorporate but do not over mix. You will know when the batter is ready when you pick it up with a spatula and it falls back down in a smooth, ribbon-like strip into the bowl. After about 10 seconds of dropping the batter into the bowl, it should still be moving. After 30 seconds, the batter should smooth back out to a fairly flat surface in the bowl.

6. Transfer the batter into a piping bag with a plain round tip. Put parchment paper or Silpat on baking trays and begin piping rounds about 3 – 4 cm in diameter. Leave a bit of space in between rounds as they will expand slightly. Once you are done piping a full tray, tap it on the counter a few times to flatten the macarons. Pre-heat the oven to about 160°C and let macarons rest on the counter for about 30 minutes before baking. Bake for about 12 minutes on until the cookies harden to touch and do not move or shift when tapped on the side. Let cool before peeling cookies off of parchment or Silpat. 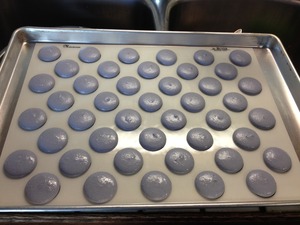 7. Form macaron cookies by sandwiching two cookies together with the filling of your choice. Macarons generally taste better the second and third day after baking and can be kept in a sealed container in the fridge. 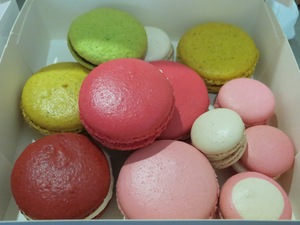 macarons made during the course in Paris