How’s everyone’s weekend so far? Even though I only had a 3 day week at work, I was so exhausted by Friday. My biggest wish was just to get an early bedtime after watching an episode of Dr. Who (which has become my guilty pleasure lately). But now that I’m rejuvenated after sufficient sleep… I’m ready to share the rum and coke cupcake recipe I made for New Years! 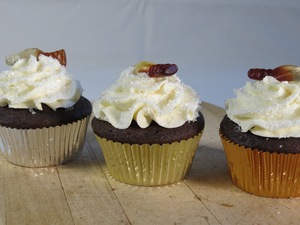 I used a recipe I found for Jack and Coke cupcakes and altered it a bit, using rum instead (since I’m not a huge fan of Jack nor did I have any on hand). I also used a different icing recipe since I have a buttercream frosting recipe I have made dozens of times and know it makes perfect frosting.

The cupcakes were absolutely delicious! They are chocolatey cake (with the cola in it), filled with ganache (which is a creamy, smooth mixture of chocolate and cream, but this ganache also had rum in it) and topped with buttercream frosting (with more rum). However, despite being possibly the most delicious cupcakes I have made to date, I found they didn’t taste like cola and even the rum flavour wasn’t that strong. I think next time I would try using a rum extract as well as actual rum to increase the flavour. Either way these were decadent cupcakes which I will be making again. My favourite part was filling them with ganache inside which made me question why I don’t fill cupcakes with delicious fillings more often?! I will definitely need to start doing that more!

How's everyone's weekend so far? Even though I only had a 3 day week at work, I was so exhausted by Friday. My biggest wish was just …

- I have found that the best way to get a perfect consistency for the ganache is to make it the night before and leave at room temperature overnight to thicken. Otherwise, you will likely need to use the fridge to cool it to a thick enough consistency in a short amount of time. If you are using the fridge, you will need to watch the consistency closely to make sure it doesn’t cool too much too quickly which will make it un-pipeable. Alternatively, you can make the ganache in advance, leave it in the fridge to store, and just bring to room temperature before piping.

- When making buttercream frosting, and anytime you are beating butter with an electric mixer, make sure you use a paddle attachment. (I didn’t have one with me when I made these cupcakes which is why you see the whisk attachments in the photos.) The whisk attachment creates a lot of air bubbles in your frosting which you don’t want.

- Be careful adding the rum to the buttercream frosting, adding a little at a time. Adding too much liquid will result in it not mixing into the buttercream properly but will separate. However, if it separates a little bit, don’t worry. The frosting will still taste great and you can cover up any imperfections with sanding sugar.