I just got back from a Moksha yoga class and it felt so good to be able to sweat and de-stress after work. I don’t really make New Years resolutions but I figured the new year would be a good time to think about my priorities. While I really love exercising, especially yoga and boxing, too often other responsibilities and commitments get in the way. I’ve caught myself cancelling plans to work out because I’m working late and exhausted. So it’s my goal to make fitness a higher priority this winter. Hopefully I can stick with it!

I could definitely use some more fitness time after eating a bunch of the rum and coke cupcakes I made for New Years. While they didn’t taste at all like coke, and barely tasted like rum, they were super delicious. And really I don’t know how the rum and coke flavour didn’t come out since I am convinced I used lots of both… Anyways, I have left the recipe at my place and am at the boyfriend’s tonight but I will share it soon since the cupcakes really were fantastic (I ate half of one before yoga in my car tonight, hoping that no one would see me). But since the cupcake recipe and photos aren’t with me right now, I figured I would talk about something else we enjoyed over the holidays – the signature Duchess cake from Duchess Bakeshop in Edmonton… amazing! 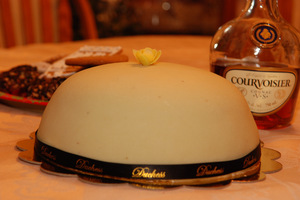 Ok, perhaps I am slightly biased since I absolutely love everything that comes out of their oven, but, honestly, who wouldn’t? The Duchess is their signature cake and comes in a unique domed shape. It is a chiffon cake with pastry cream, raspberry and vanilla whip cream (where you can clearly see the specks of real vanilla bean) layers. The flavours compliment each other perfectly. The cake isn’t too sweet or heavy which makes it the kind of cake where it’s hard to stop eating… The whole cake is also covered in a layer of green marzipan which makes it look flawless. 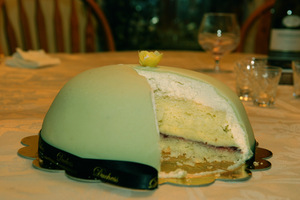 So seriously if you guys haven’t tried this awesome cake and are craving something sweet and amazing, give it a try. If you don’t want a whole cake to yourself, there is also a smaller 4″ size. And if you decide to eat it in your car right before yoga, I won’t tell.