Is anyone else bored with cupcakes? Lately I’ve been feeling like cupcakes are just old news. Sure they’re great in their individual paper liners and colourful frosting… but they just seem overdone. There are cupcake shops in every part of town, they’re commonly served at weddings and I’ve made them so many times and for so many occasions that I could probably whip up a batch in my sleep. I was just tired of the same old boring cupcakes… until I discovered the Sprinkle Bakes blog a couple weeks ago! Heather is amazing! Her creations are truly artistic and she will revive your baking if you’re in a cupcake rut like me. She has everything from cupcakes made with wine to cupcakes with a flaming strawberry on top and tonnes of non-cupccake recipes if you just can’t stand cupcakes all together

So when my turn came around to bring in baking to work (we have a rotating pastry schedule) I decided to make these black sesame lemon cupcakes! 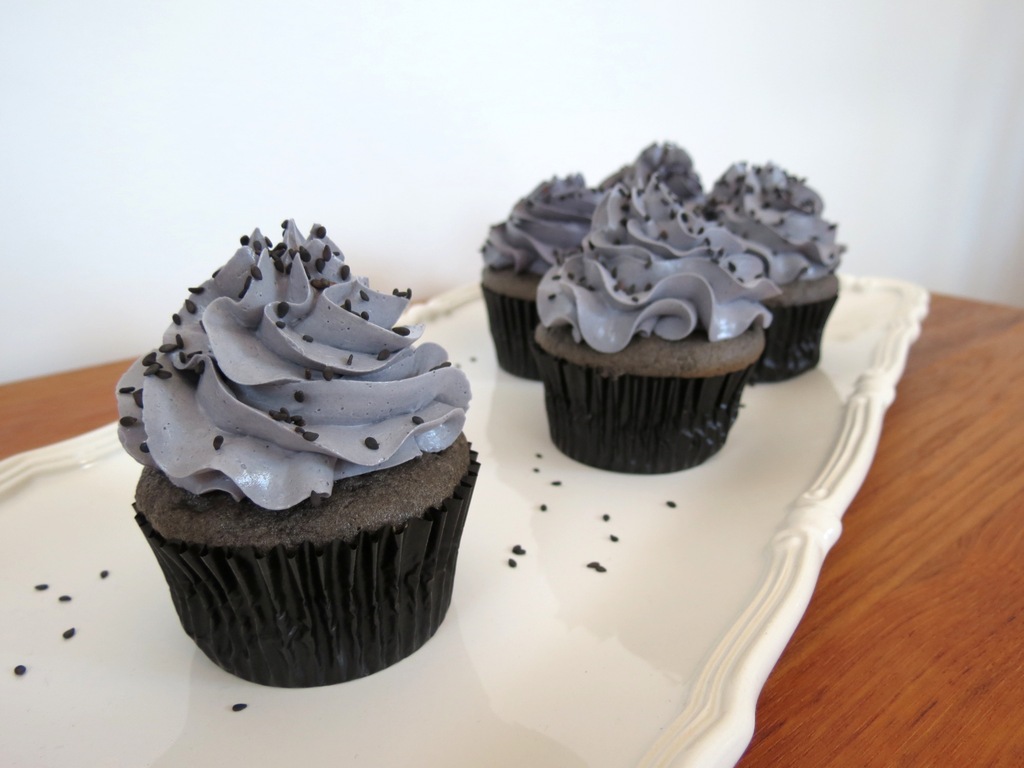 The thing that really intrigued me about them is the beautiful grey colour (they’d be perfect for a 50 Shades of Grey party). And to make them even more awesome, on the inside, they’re filled with delicious lemon curd. I love the contrasts in colour and flavour. 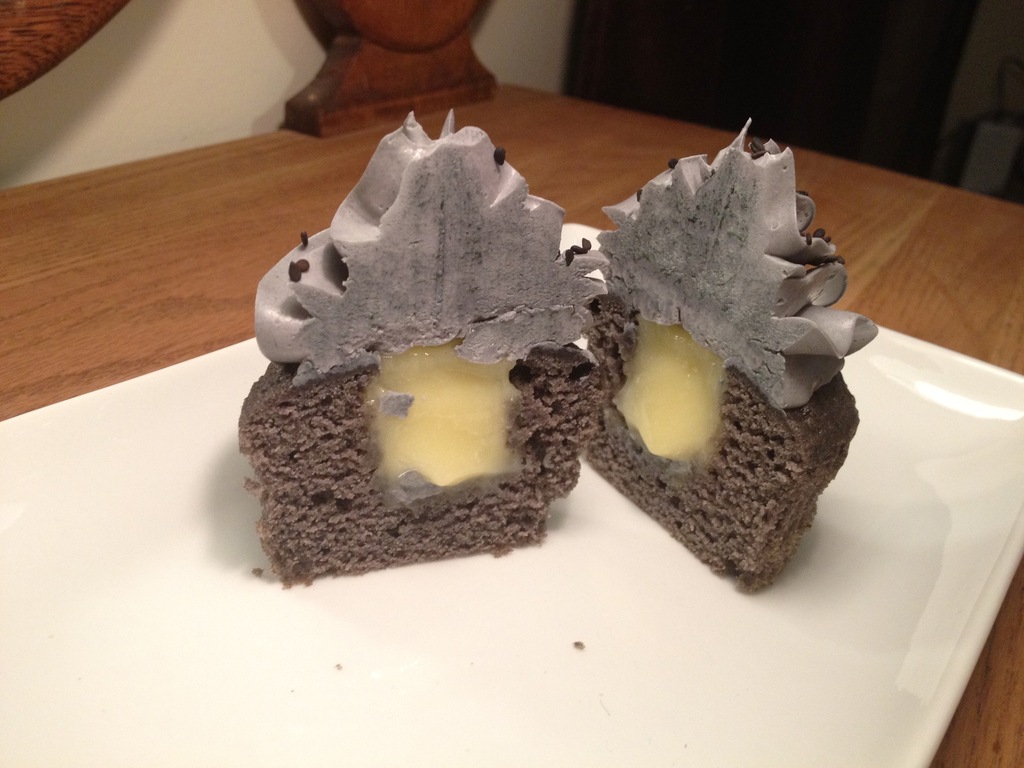 A lot of effort went into these guys. First off, I couldn’t find any black sesame paste in any Asian market nearby. I decided to make my own using the Sprinkle Bakes recipe. I liked making it myself since I knew exactly what was in it and could keep out any yucky preservatives. If you’re planning on making it yourself, you should know that the paste will taste somewhat bitter(sweet) when it is done. Don’t panic (like I did). The black sesame seeds naturally have a bitter quality to them but when added to the cupcake batter will taste great. I loved the paste so much that I’m thinking of making ice cream with it when the snow melts and ice cream season finally gets here (it’s April and we have a snow storm warning this weekend). 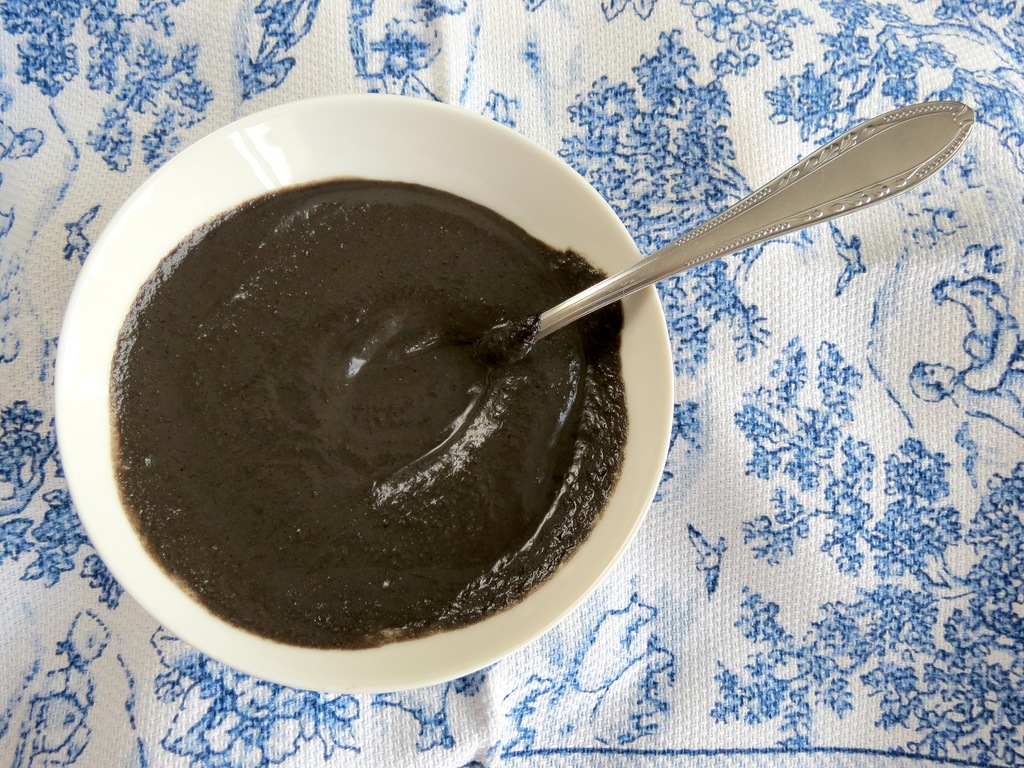 My batter was a beautiful grey colour just as promised. 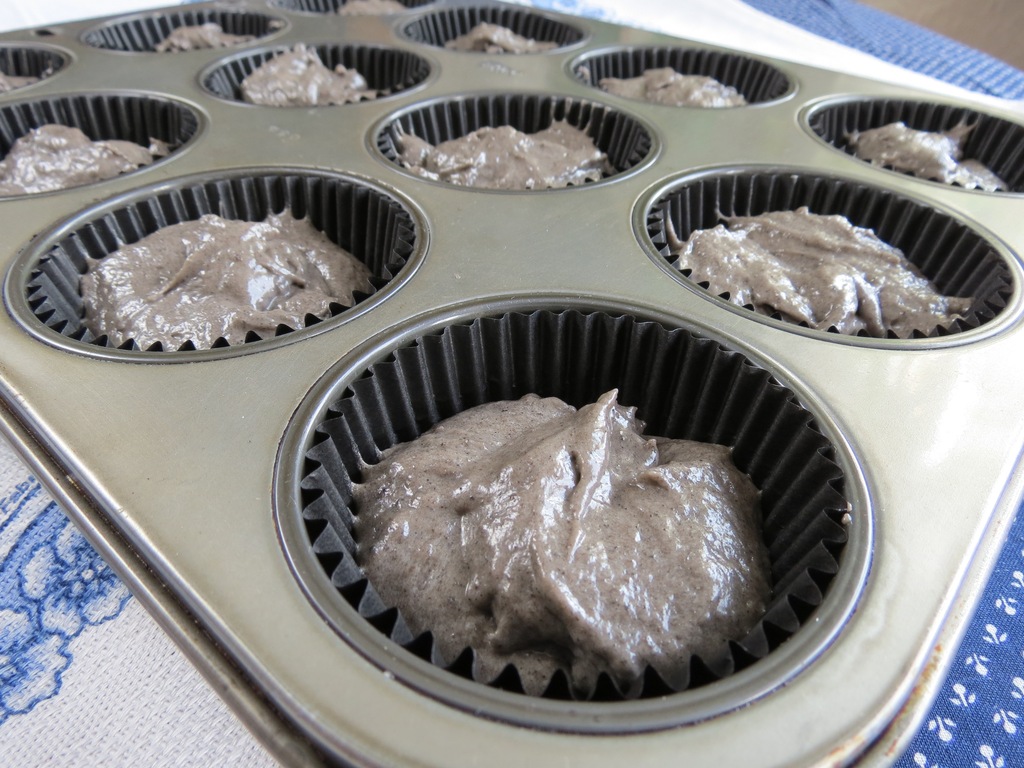 As were the baked cupcakes… 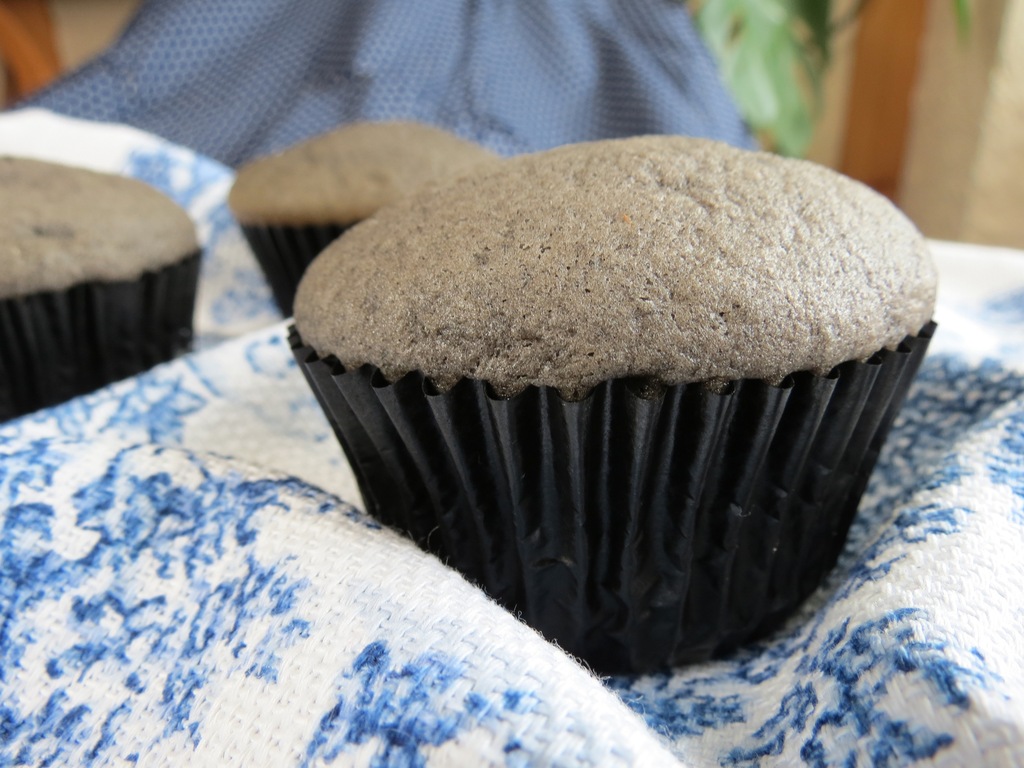 After these guys cooled, I filled them with lemon curd. 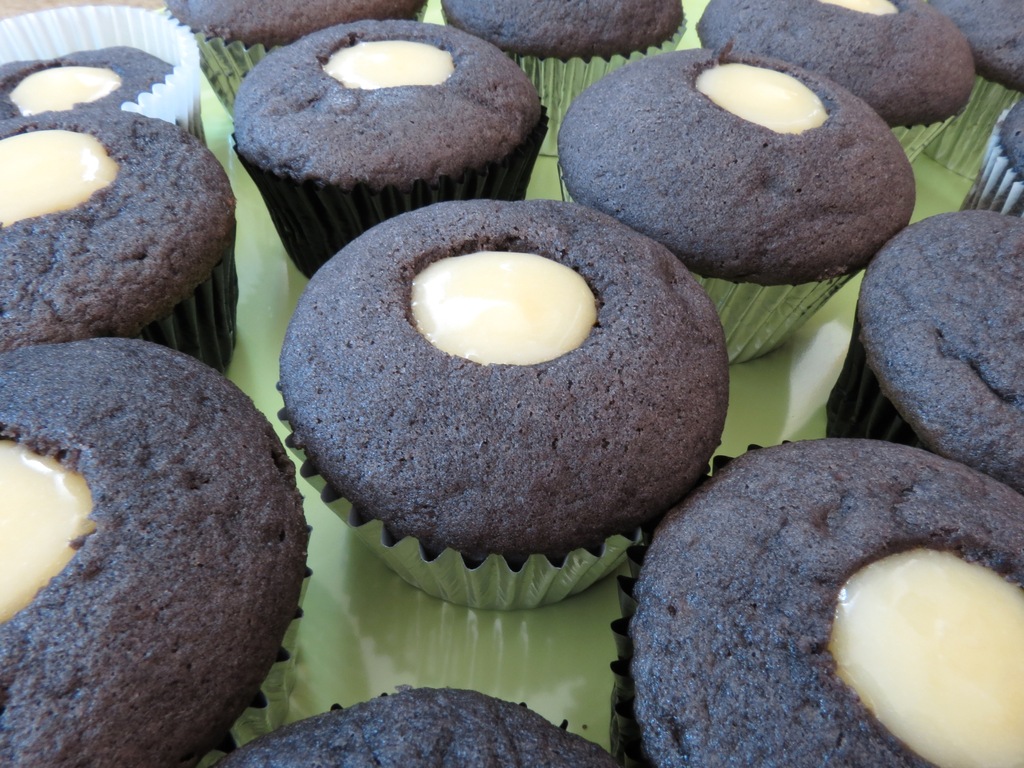 For the frosting, I strayed from the recipe Heather suggested. I have a super tasty swiss meringue buttercream recipe that I swear by. I altered this recipe slightly by adding 2 tsp of lemon extract instead of vanilla and 1/4 cup of the lemon curd once all the butter had been added. The result was a fantastic lemon buttercream which paired so well with the sesame cupcakes. 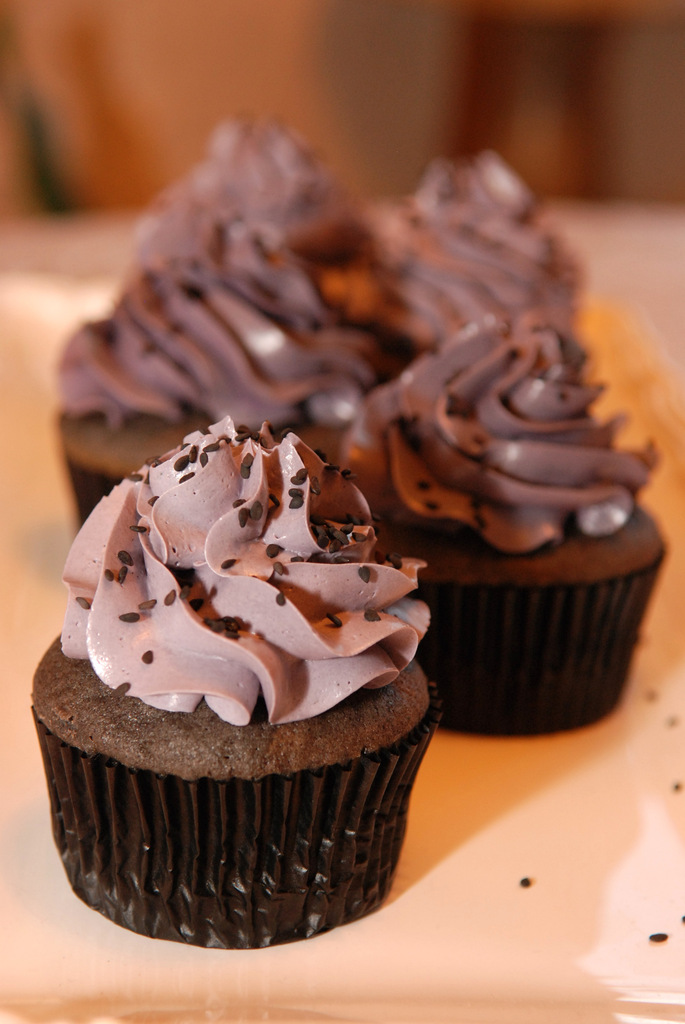 Sprinkled with some extra sesame seeds, these cupcakes were a hit! I would gladly make these again. The cakes were so moist and the lemon curd did not disappoint. My only complaint has to do with black gel food colouring. I had heard that using black gel food colouring is often ineffective because with a bit of time the colour turns purple. Since I didn’t have any black powdered colour, I decided to risk it. Well, let me tell you that all the things I heard were true. By the morning after I iced the cupcakes, they had turned a lovely shade of purple. 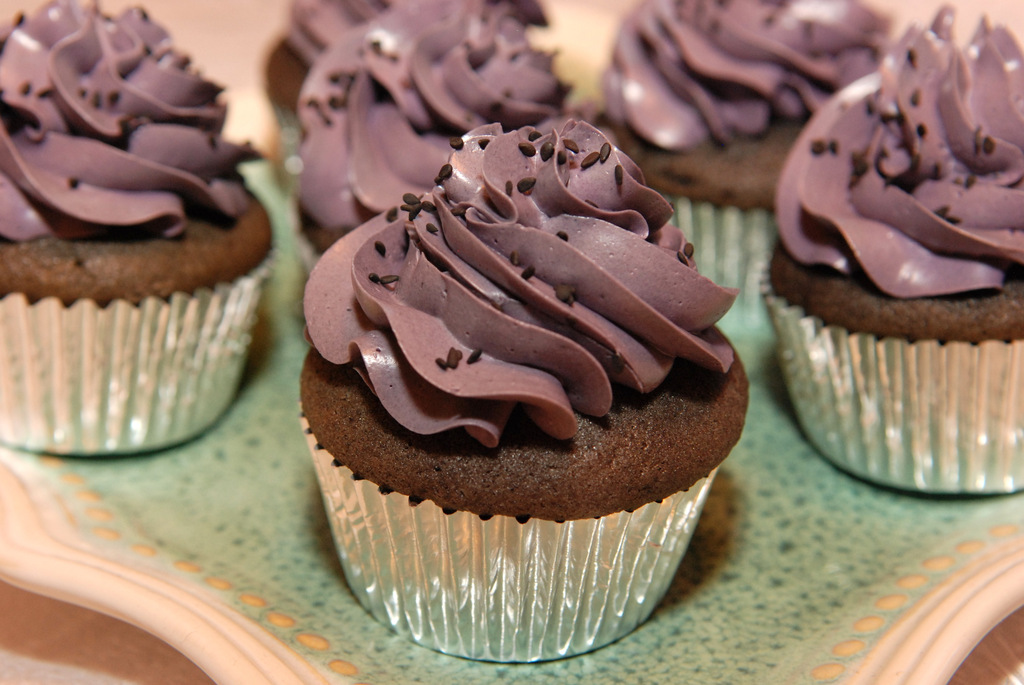 I’m definitely going to acquire some black powdered colour next time! For anyone looking to whip up a batch, the recipe can be found here. Let me know how they turn out!